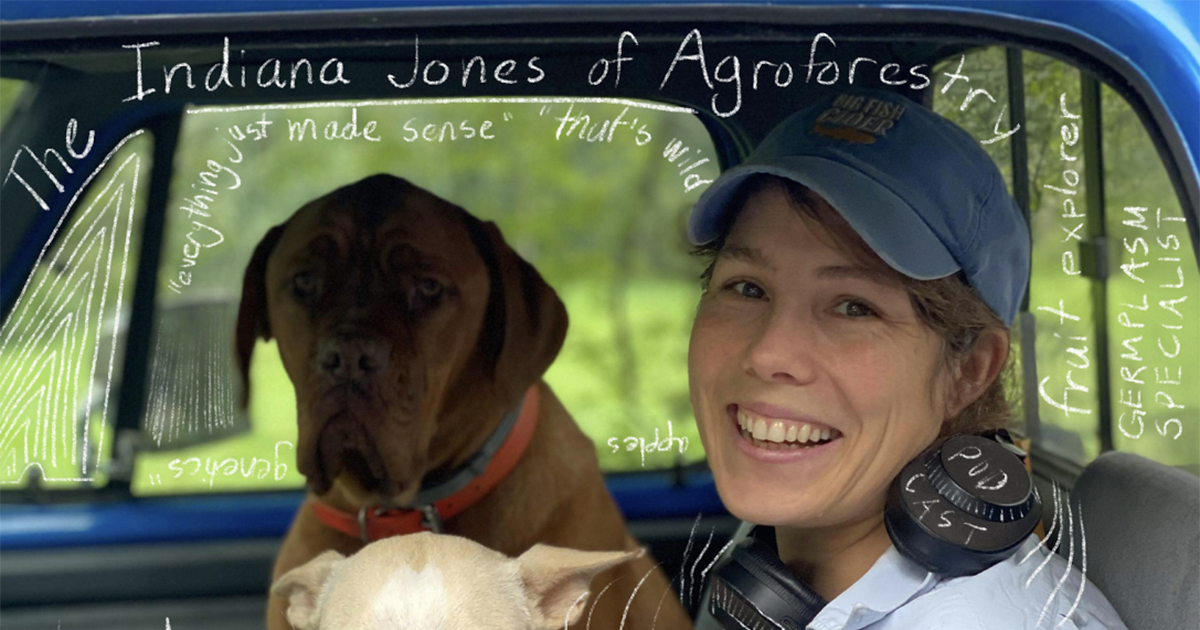 🔊 “The Indiana Jones of Agroforestry” with Eliza Greenman

Eliza Greenman is a farmer, “fruit explorer”, and Savanna Institute staff member based in Virginia. In addition to working with the Savanna Institute to identify the best tree crops and cultivars for our research and plant breeding programs, Eliza is in the midst of writing a new business plan for purchasing a farm, while also continuing her efforts to track down living fruit and nut cultivars that have been lost to time.

With the help of colleague Taylor Malone and organizations such as the Northern Nut Growers Association and NAFEX (the North American Fruit Explorers), plus a lot of historical research, Eliza has become something like an Indiana Jones figure in the agroforestry world. On her own land, she experiments with silvopasture techniques to significantly offset livestock feed costs with assorted fruit and nut varieties as they fall.

On the latest episode of the Perennial AF podcast, Eliza answers questions from listeners, responds to some agroforestry would-you-rathers, and talks about how she’s been encouraging people to “embrace the chaos.”

Here’s an excerpt from our conversation, edited for length and clarity.

Jacob: I’ve tried to explain what you do to people by saying ‘she’s like the Indiana Jones of agroforestry! She finds these old maps, and then goes out and finds these tree varieties that are extremely rare and have just been growing unnoticed and forgotten on the landscape…’

Eliza: Yea, when you can find a map, that’s gold! But, for example, something happened a couple days ago… Three weeks ago I was reading a paper about this incredible mulberry tree in Annapolis, Maryland that produced really thick leaves and great fruit. And I was thinking ‘I wonder if it’s still around’. And I did about as much as I could on Google – it said it was “near the garrison”, and that wasn’t on any Google map, and I was like whatever, it’s probably gone. And then two days ago, a cousin of mine – and I had never spoken about this tree to anyone – sends me a picture of her standing next to a tree in Annapolis, Maryland – a giant mulberry tree – and was like “thinking of you”, and I was like ‘WAIT! Are you near the garrison?’ And she was like, yea!

Jacob: That’s amazing! It’s like the trees are finding YOU now!

Jacob: You were part of the keynote panel for the 2021 Perennial Farm Gathering, and I remember you saying something like “I’ve been trying to embrace chaos.” I’ve been thinking about that ever since – can you explain what that means to you?

Eliza: So what I mean when I say ‘embrace the chaos’ is like, if I were to bring somebody out to my farm, like a group of older farmers, and I want to show them things like trees on a landscape, cover crops, everything could be looking great… But if there’s one sprig of Johnson grass growing like 300 feet away, they’ll say “Oh, you’ve got Johnson grass.” (Laughs). And that’s all they see. And it’s like, okay, you might as well leave now. And so those are people that can’t embrace ANY type of chaos. It immediately puts blinders on all the other incredible things going on, and the solutions that could be had.

Jacob: I also remember you saying that when you first got into agroforestry, it felt like everyone you met was old and bitter, and that was pretty discouraging. Does it feel like that’s changing?

Eliza: Keefe (Keefe Keeley, Savanna Institute Executive Director) was saying recently how he was thankful for the resilience of the apple tree, that despite getting browsed and mowed and diseased, it still keeps thriving. And a lightbulb went off for me. That’s like a lot of the old growers in the US right now. They’ve been beaten, they’ve been browsed, they’ve been neglected, and what happens is they develop this defense coat, just like apples do. Apple trees will sprout thorns. The apples will literally become bitter. And that’s what these people are doing too. We just have this whole generation of thorny, bitter farmers. Because they put in the work, and they had to suffer. And it gave me an awareness of us, and our hardships, and how we are going to have to overcome them and still, like, face people afterwards. 🔊 “Is This Really A Dairy Farm?” Ask-a-Farmer with Greg Galbraith

Greg Galbraith has spent most of his life managing a dairy farm in Marathon County, Wisconsin. His farming career involved shifting his dairy operation to a grazing-based system, transitioning to organic practices, and finally passing on the farm to a new generation of organic dairy graziers. By the end of his farming tenure, his farm had so much perennial cover that people would often ask him, “Is this really a dairy farm?” As we enter the holiday season, many of us begin thinking about food and cooking - and what to do with perennial crops as they go from farm to kitchen. In the latest Perennial AF podcast episode, we listen back to a conversation between cooks with a passion for... Several years ago, the Savanna Institute received grant funding for a silvopasture establishment study, working with four Midwest farms to compare different methods of protecting newly planted trees from livestock. What they found is that maybe it’s better to...