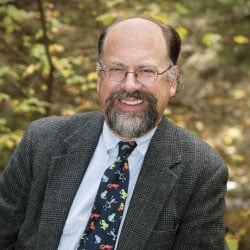 On 1 July 2014, William H. Schlesinger retired as President of the Cary Institute of Ecosystem Studies, a private ecological research institute on the grounds of the Cary Arboretum in Millbrook, NY.  He had assumed this position after 27 years on the faculty of Duke University.  Completing his A.B. at Dartmouth (1972), and Ph.D. at Cornell (1976), he moved to Duke in 1980, where was Dean of the Nicholas School of the Environment and James B. Duke Professor of Biogeochemistry.

He is the author or coauthor of over 250 scientific papers on subjects of environmental chemistry and global change and the widely-adopted textbook Biogeochemistry: An Analysis of Global Change (Academic Press, 4th ed. 2020).  He has published editorials and columns in the Charlotte Observer, Chicago Tribune, Los Angeles Times, New York Times, Philadelphia Inquirer, and the (Raleigh) News and Observer, and other media outlets. His latest book, Translational Ecology, was published in September 2017 as an anthology of these popular writings.

Schlesinger was among the first to quantify the amount of carbon held in soil organic matter globally, providing subsequent estimates of the role of soils and human impacts on forests and soils in global climate change. He was elected a member of The National Academy of Sciences in 2003, and was President of the Ecological Society of America for 2003-2004.

His past work has taken him to diverse habitats, ranging from Okefenokee Swamp in southern Georgia to the Mojave Desert of California, and three times as a Duke alumni tour guide to Antarctica. His research has been featured on NOVA, CNN, NPR, and on the pages of Discover, National Geographic, the New York Times, and Scientific American.  Schlesinger has testified before U.S. House and Senate Committees on a variety of environmental issues, including preservation of desert habitats, global climate change and carbon sequestration.

Schlesinger currently serves on the Board of Trustees for the Natural Resources Defense Council (NRDC; New York), and the Southern Environmental Law Center (Charlottesville).

He and his wife, Lisa, live on Cobscook Bay in Lubec, Maine, where they enjoy nature, bird watching, martinis, and coastal life.